Silk products have been always nearby people's lives in Japan for a long time. Silk can be used in various situations such as Kimono or commodity goods as time goes by. Here we introduce the products made from the authentic Japanese silk.

Yuki City is in the middle of Kanto Plains, placed at the border between Ibaraki and Tochigi prefectures. Generally, the silk fabrics which are made in and around Yuki city are called “Yuki Tsumugi”. According to oral or literature tradition, its traditional craft process was established in the era of Emperor Sujin, who was said to be existed between the third and fourth century. Yuki Tsumugi is still hand-made through this delicate artisan works.

Yuki Tsumugi is made thorough over twenty procedures. The procedure starts from the process of expanding boiled cocoon by hand, called “Mawata-kake”, and finally ends in very primitive weaving method called “Jibata-ori” , with the back-strap hand loom (They use whole body as a weaving machine, in details, to weave with pulling a warp yarn by using a waist) . In 1956, three artisan techniques in these procedures were designated as national important cultural properties. Furthermore, Yuki Tsumugi was inscribed on the Representative List of the Intangible Cultural Heritage of Humanity UNESCO for its artisan work traditions, have been passed down from generation to generation. Yuki Tsumugi is now recognized as one of representative silk fabrics in reality as well as in name.

The technique, spinning yarn threads by hand from a loosen cocoon called “floss silk”,
which is made by spreading boiled cocoons .

Quest of Dream Yuki Tsumugi,
Originated from Its Golden Age

Ogura Shoten, established in 1829 (in Bunsei-era), has been preserving historically precious Yuki Tsumugi fabrics. They found some fabrics, was made in after 1960’s (in second half in Showa era), have special excellences with glossy and firmness. The strong intention to re-produce this quality of heritages again and several trails to figure out the reason why they could keep this high level silk materials, they finally found out its origin of excellence, actually it came from the difference of silkworm species. The species used for the fabrics at this age is called “Asahi-Tokai”. The elasticity of its silk floss provided its threads toughness. “Asahi-Tokai” could be said the most suitable species for Yuki Tsumugi. Through these efforts in pursuit of the best silkworm species, their “authentic” Yuki Tsumugi has superior glossy and its unique texture. It is certainly the products, have been brought back from their historical background. 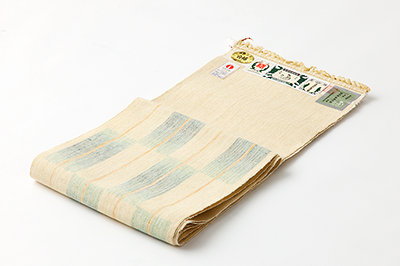